A Brief History of Our Online IQ Test Free Site

The IQexams site was originally created 2017 by Hans Sjoberg and Henrik Nilheim. Henrik had many years of experience from developing the apps for professional psychometric online testing, used for recruitment. And Hans had experience from creating IQ tests for recruitment. Hans and Henrik got together and created IQexams.net with the purpose of creating automatically scored online IQ tests, and trying them out together with a number of very enthusiastic users from all over the world. New tests are added all the time and we even invite guest tests authors and guide them to create new tests for IQexams.

All people and skill levels will be able to find suitable tests at IQexams. We recommend beginners to start with the easy tests first, you find them by clicking on Info and look at Difficulty. Naturally many users at IQexams are skilled and think it is fun to test themselves, many are Mensa members, the RAPM and FRT-A, FRT-B tests used by Mensa have a quite low ceiling 135 SD15 (FTR-A) and they love the challenge of trying themselves on a much higher IQ scale, and we provide that on IQexams.

IQexams is unique, unlike almost all other IQ test site's on the internet, we can sometimes welcome external people to create new tests for us. Almost anybody can invent new interesting difficult items, smart things and new ideas that nobody ever thought about before. If you do many of them, well you will actually have something that can be an IQ test. After some initial reviews by IQexams staff and suggestions to changes we can actually do an IQ test together, and let people all over the world try it. We recommend doing the tests fairly easy, so they can be used in as timed tests.


Questions and Answers in the tests

Most IQexams.net tests are easy in the beginning and getting harder at the end, this is the normal method when creating tests, many easy or medium level question and a few difficult ones. Normally you need a long test to get a better measurement, at least 40 items. But short tests also fill a purpose when the estimation of people’s talent needs to be done quickly; this is common in recruitment aptitude testing. Psychologists use the term “Item” instead of question, when talking about IQ tests.

The norm is the table that translates the number of correct answers (raw score) from a test to an IQ value. When norming a test, the usage of score-pairs is very essential, simply meaning looking at old results reported in from the tests takers and calculate a corresponding level for the norm of the IQexams test. For norm setting, it is most interesting to look at results from proctored tests, made by psychometrians, tests like WAIS, Raven Progressive Matrices, JCTI, Stanford-Binet. Another important factor for the norm is the normal distribution, we look at expected number of scores at different levels, for more information, see: https://www.iqcomparisonsite.com/IQtable.aspx. Finally there is a lot of strong opinions within the IQ communities about norms, people think the most important thing to make a test better is only if you get more people to do the test for a better norm, the "N" number, this is not the case, N=100 is normally more than enough to set a final norm and actually it can be quite good already at N=30. The limitation of the test's precision of measurement is not in the norm, it is in the quality of the test itself.

Many people within the IQ communities assosiate very defalted norms with higher quality, at IQexams, we don't want to use this approach, and instead give fair realistic IQ resutls to the majority with the risk that we have a few more outliers.

De Facto standard for Standard Deviation is 15, as used by WAIS, this is also used by IQexams

Reliability in Cronbach’s Alpha vary at IQexams and is in most cases 0.75-0.95. We only include completed tests when calculating the reliability. Reliability is lower for short tests; normally you need at least 30 items to be able to reach around 0.9, the longer the test is the better the reliability will be. Validity, that the test is measuring the right things can be validated when correlating the test with professional proctored and/or psychometrician made tests. The Correlation figure is the most easy to grasp measurement for most people, and this is discussed all the time in our FB forum. We use Pearson Correlation and include all results from proctored or made by psychometrican tests.

Spatial, are figure based tests with multiple choice answers. These tests are considered as Culture Fair and most likely best for beginners. Spatial tests normally work very well. For the Author, they are fun to create, but very attempting to make them too difficult and the users will see other solutions than what the Author intended. But if the test is made well and balanced between easy and hard items, spatial tests work wonderfully.

Numerical tests are a bit trickier than spatial and can have an open field for the answers or multiple choice. With an open answer that you have to type in, they are getting more difficult. One problem is that people will try to solve them like school math, this is not the intention. Normally you want to use numerical patterns or series as the challenge. You are allowed to use calculator on all numerical test at IQexams.

Verbal tests are among the most popular and really fun to try. A natural limitation are people’s language skills in English, but you are allowed to use Google Translate for instance, at least for the test without time limits, this is an useful option. We have a few at IQexams, most without time limit.

The RIQ concept was introduced as a special feature for the Member Portal, that the users can sign up to. This will give an overview of all tests done. We are now at the 5th generation of RIQ algorithms, using Ferguson's formula and weighted quality (reliability) of the tests to combine the results from several IQ tests. As a user you will get a table in the Portal with RIQ listed for different abilities. Presented are: Total RIQ, Spatial, Numerical, Verbal, Mixed and Perspective. All users are free to select the tests they want for this calculation, a problem is that people tend to only select their best scores for this and inflate the RIQ value somewhat. IQexams strongly suggest to only remove tests that were failed due to tiredness or anxiety.

A hugely influencing factor when doing tests is how you feel when doing the test. For instance at the one well known proctored test you only have 25 seconds to reply each question. Being fast is also a trait correlating to the g-factor, but we at IQexams strongly suspect that some people are unfairly affected by severe anxiety when exposed to time pressure and not being able to perform on their expected real levels. Hence most timed tests at IQexams have about a minute per question, and you have a bullet bar on the top that makes it possible to jump directly back to past items and try them again. The bullet bar indicates with back or green color if the question is answered or not, so you can skip difficult questions and try them later if you get time left. 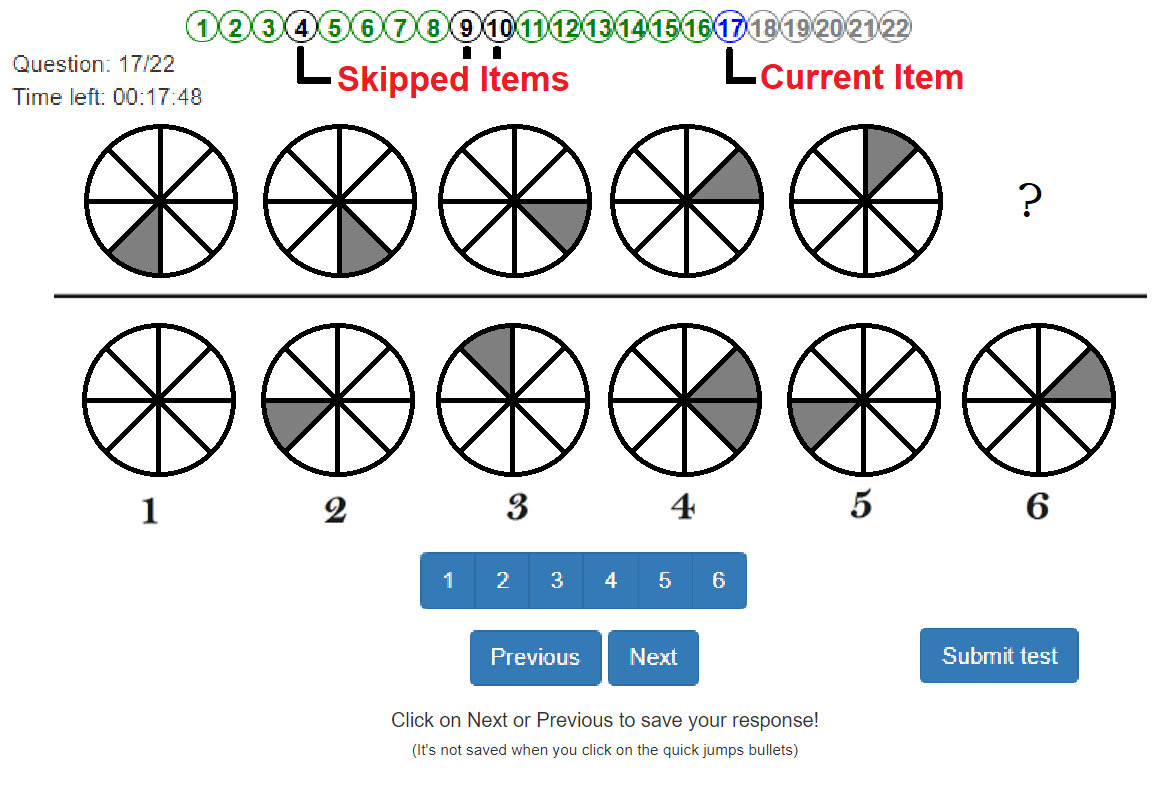 Completely untimed tests or test recommended doing at home a xy number of hours are another ball game, anxiety is no longer the problem, instead we get problems with people spending excessive time on the tests (sometimes up to a year), this can inflate the results.

Of course, people love to get things free, we understand that. However, a problem occurs when having free online tests, people can do the tests again and again, until they crack the score key and get unreasonably high IQ levels. To slow down this repetitive test taking tendency, all will get the score results delivered a number of days later with a delayed email. However, you can get the score report directly, for this service we will charge a small amount. Please note that It also cost money to run a tests site and continuously working on it and improving it. A win-win situation for both IQexams and you as a user.